Over the past two weeks, Year 6 pupils have had the privilege of touring the Houses of Parliament. Before they were shown around the heart of our government, the pupils learnt about Parliament’s place in our rich history in an exciting 360o cinema where they discovered the origins of Parliament from the Magna Carter through to the Civil War and Glorious Revolution.

Year 6 then entered the Palace of Westminster through the same entrance the Queen uses on the State Opening of Parliament, passing through the Robing Room and the Royal Gallery before entering the House of Lords. Here, the pupils were fascinated to stand in front of the Queen’s throne – complete with gold leaf – and learn about the experts that scrutinise future legislation in the Lords. The pupils then passed through the famous Central Lobby, with 6 Birmingham also catching a glimpse of a famous MP, on their way to the House of Commons via the division lobbies. Pupils were saw where the old traditions of the building meet the new with the hundreds of dangling microphones and stood in both the Government and Opposition backbenches. Finally, the pupils made their way to Westminster Hall to finish their tour, walking in the footsteps of famous speakers such as Barack Obama and Nelson Mandela, who are amongst the few invited to speak in the ancient hall.

Who knows, perhaps one day one of these pupils will be representing us in Parliament themselves? 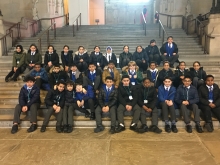