A group of students from Ark’s King Solomon Academy (KSA) discussed careers in economics and politics at a memorable meeting with the Chancellor Rishi Sunak at the Treasury in Whitehall in London this week.

The special event was organised to mark International Women’s Day and the Year 10 and Year 12 female students took the opportunity to reflect their hopes for the future, their career aspirations, and how best to break down barriers faced by women.

The 14 students also talked to the Treasury’s Chief Economic Advisor Clare Lombardelli as part of what was described as a meeting they “will remember for many years to come”.

KSA is an all-through school in Westminster, London, with nursery, primary and secondary pupils. It was described as “an outstanding academy” after its last inspection by Ofsted in 2013. 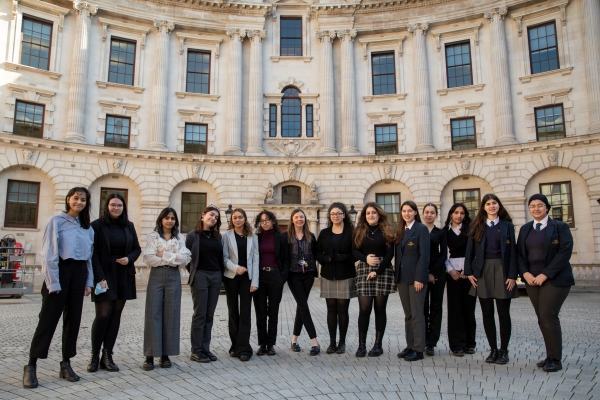 Speaking after the event, students were delighted to have had the chance to meet and speak to senior politicians and civil servants.

“It was a great learning experience and a great opportunity too,” said Sana, Year 10. “It was really inspiring to see how involved women now are in economics and politics.”

Aysha, Year 12, said: “I enjoyed talking to people with high status jobs and learning about the journeys they took to get to where they are.”

You can watch further comments from Alaa (Year 12) and Katerine (Year 10) on Twitter.

The group were accompanied to the Treasury by Gabbie Bristow, KSA’s Head of Year 13. She said:

“The meeting was a special opportunity for our students. In a field which is typically male-dominated, our students left the event feeling empowered to become the next generation of leading politicians and economists to help make our society a fairer place for all. It's something they’ll remember for many years to come.”