93% of the Class of 2016 have achieved 5 A*-C grades including English and Maths setting an impressive standard for the school, and making us one of the best in the country. 75% of students also passed the EBacc – a measure of the key academic subjects at GCSE.

The results are the first step for the school in achieving its mission, to prepare all of its’ pupils for success at university and beyond, irrespective of their starting point. The curriculum is academically rigorous, preparing students for success at A-level and university study. 95% of pupils achieved B or above in English Literature. 75% of pupils successfully studied triple sciences.

Max Haimendorf, Secondary Head of King Solomon Academy, said:  “These results reflect the hard work and commitment of all our staff and students over the last five years since the school opened. They show that all pupils, irrespective of background, can achieve success academically, if they have the right support and teaching. I am so proud of what they have all achieved and know that they will go on to succeed in whatever they choose to do.”

A number of students did particularly well:

Moses Lawson (pictured below with his father) has just achieved impressive GCSEs. He has performed in one of the school’s unabridged Shakespeare plays, played in the school’s string orchestra and made great use of the Access Project tutor he has worked with, a lawyer at local firm as well as undertaking several work experience placements through the school as well. Moses achieved 7 A*s, 3 As and 1 B, including A*s in English, Maths, Science and History. He wants to go on to study Law at University and be a high flying city lawyer like his tutor. 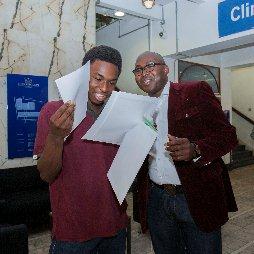 Mohammed Ali Hazime (pictured below with his mother) is a GCSE student at in Edgware Road. His family are from Iran. He achieved 3 A*s and 8 As including A*s in Maths, English Literature and Religious Education. He takes part in Model United Nations, plays in the King Solomon Academy String Orchestra which recently toured Austria. His great grades will help him to achieve his ambition of studying at one of the world’s great universities, such as the ones he has visited with the school. He has also written as part of the First Story project, working with our First Story Author, David Reynolds, who is a co-founder of Bloomsbury Publishing. 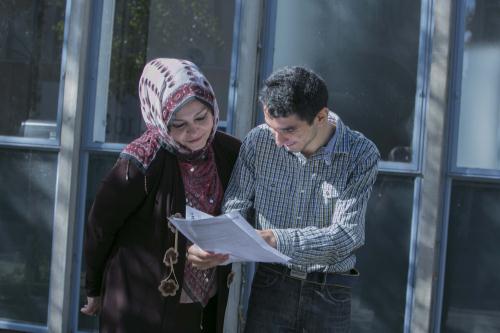 Karan Bagri (pictured below) has also just finished his GCSEs. Karan achieved 11 GCSEs; 10 of them at A and A*, including A*s in Science and History. He has ambitions of studying economics and finance in the future.

Lify Hossen, pictured below, is a GCSE student. Her family are from Bangledesh. She achieved only the national average of level 4s when she entered KSA but managed to achieve 8 As, 1 B and 1 A*, including an A* in History. She and excels at Art, which she studied for GCSE getting an A. 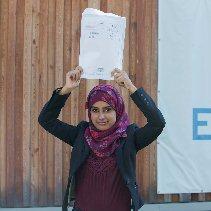 Shakeel Zaman, pictured with his father here, achieved 8A*s and 3 As. 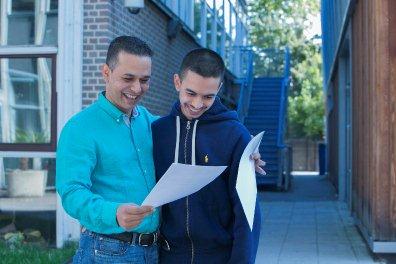